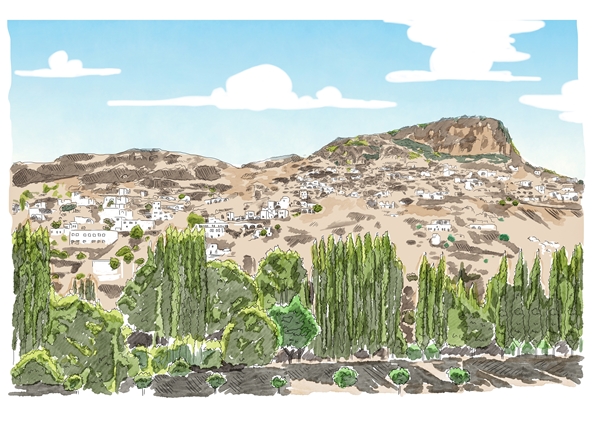 In this work, which first proceeded with the ritual and the tone of green in the town of Göre, where oil paintings were made, the artist decided to draw the wonder of nature after the Spanish artist inspired by El Dorado, which carries the historical texture of the town of Göre, which was digitally prepared again.
El Dorado is the lost city of gold; It is a legend of Spanish origin created by ritual bathing in the lake by pouring gold dust on the body of a South American tribal chief.
The artist who thinks that he has the same legend here, thinks that he will have the same popularity here one day. Cappadocia Hill Hotel & Spa thanks to the pioneer. Now the last approved by Google Relative Ruins Open Air Museum is waiting for new visitors.
Historical Inspirations in Cappadocia
Cappadocia is a very rich place in terms of historical places as well as places to visit. There are different breezes at each point for a spectacular trip. Cappadocia card, which makes a difference with its many natural beauties, is the subject of postcards. Things to do in Cappadocia; Urgup, Avanos, Goreme, Zelve, Uchisar, and finally the ruins of the Open Air Museum.
History of Cappadocia
Cappadocia is a region dating back to ancient times. Fairy chimneys and many remarkable areas in the region were formed by the active volcanic mountains in the region. In addition to this, they have made many areas with their own hands in the civilizations that reigned in the region and have enabled the emergence of Cappadocia today.
The first known civilization in Cappadocia, dating back millions of years, was the Assyrians. Assyrians BC 3000 BC took place in the region. Many civilizations took place in the region after the Assyrians. These civilizations include Hittites, Persians, Romans, Byzantines, Seljuks, Turkish Principalities and Ottomans. In fact, the Persians established this area where they dominated and called the Land of Beautiful Horses.
Natural beauties
Cappadocia is rich in natural beauties. Fairy chimneys formed by extinct volcanoes have an authentic atmosphere. Besides, Bitter Lake, which is a crater lake, is like a hidden paradise. Güllüdere and Zemi valleys also have spectacular views. Located in the region and becoming the symbol of Cappadocia, the Three Graces must be visited with the legend story. Finally, at sunset you can find a visual feast in Göre Panorama.
Cappadocia from History
You will be fascinated by the noble stance of the private domed stone houses that arose from the lava of the volcanic mountains in ancient times. All the living spaces in it will take you to the past and will be completely under your influence. Cappadocia is the city of love.